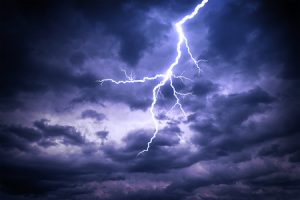 There is a lot of power packed into each and every lightning bolt that comes shooting down from the sky. On average, a single bolt of lightning contains about 1 billion joules of energy. That’s enough energy to keep a 60-watt light bulb turned on for six months straight. And believe it or not, it’s also enough energy to allow a lightning strike to turn sand into glass.

It’s rare to see lightning transform sand into glass. But it does happen from time to time in parts of the Sahara Desert, along the coast in Australia, and in several other places around the world. In order for it to happen, lightning has to strike sand and heat it up to about 1,800 degrees Celsius in under a second. When the circumstances are just right, the lightning will fuse a bunch of sand together and turn it into silica glass. It’ll also send energy radiating through the ground to create hollow glass tubes that are called fulgurites. This process is called petrified lightning, and it all happens very quickly.

Because this process is so rare, fulgurites have become very valuable in certain circles. Fulgurites are often used to create jewelry that can fetch hundreds and even thousands of dollars. They also have a lot of scientific value to those who research them. Scientists believe that the gas that is trapped inside the bubbles in fulgurites can reveal a lot about the history of the sand that was used to make the glass tubes in the first place.

Fulgurites don’t have many practical uses in the glass industry. But they do illustrate the power of lightning and show the great lengths Mother Nature goes through to create glass. ProCurve Glass Design, Inc. finds the process fascinating and sometimes uses it as inspiration when creating our own glass. Call us at 215-441-9101 today to see how our curved marine, automotive, rail and heavy equipment glass could benefit you.